Introduction: Among all types of transplant complications, that related to airway anastomosis, such as stenosis is still uncertain¹². Starting by the difficulty in diagnosis, such as the low precision of bronchoscopy, high cost and invasive test. This article purpose a precise and non-invasive diagnostic method of bronchial stenosis after lung transplantation based on three measures got from a reconstruction of thorax computerized tomography (CT) using a software called TeraRecon. Objective: The anastomosis index (AI), ratio of the area of the bronchial cross-section at the site of the anastomosis to the arithmetic mean of the cross-sectional areas 5 mm upstream and 5 mm downstream, obtained from reconstruction of a thorax CT has direct correlation with the bronchoscopic and clinical diagnosis of bronchial stenosis. Methods: Were obtained all cases of clinical and bronchoscopic diagnosed bronchial stenosis after lung  transplantation at Heart Institute of University of São Paulo, between 2003 and 2016 (n=8). Another 8 patients, without any signs of stenosis, were selected to the control group. After that, the closest CT from the diagnostic was obtained and reconstructed using the software Terarecon, which is capable to find the exact area of any point of a cylindrical structure chosen by the operator. Then, three areas were obtained: 5mm before, at the anastomosis and 5mm after. Were calculated the Anastomosis Index (AI), which is the ratio between the area of anastomosis, and the arithmetic average of the areas 5mm before and 5mm after the anastomosis. After that, the data was confronted to variation of best FEV1 from transplantation to chosen CT and the FEV1 closest to the chosen CT. Results: As expected, in patients without bronchial stenosis, the area of the bronchi cross- section decreases linearly as it moves from proximal to distal in the bronchial tree, the AI in these cases tends to 1. Whereas, when there is no decay linear, that is, there is bronchial stenosis at the anastomosis, the AI was less than 1. There was a significant difference between AI in stenosis group (n=8, M = 0.387, SD = 0.151) and control group (n=8, M = 0.850, SD = 0.091). t(16)= -7.893 p < 0.001. This findings were supported by mean reduction of FEV1 in 17.71% and median 19.81% on stenosis group and mean reduction of 5.45%, and median 5.35% on control group. Besides that, the values undergone in a t-test, which returned a t-value = 2.879 with a p-value = 0.0129. The result is significant at p < 0.05. Conclusion: The Anastomosis Index can be useful in diagnosis of bronchial stenosis after lung transplantation, it is harmless and subsequently may help as a basis for new studies involving treatments. It is worth mentioning that is also a rational use of resources, since lower costs are generated by the CT analysis than performing a bronchoscopy, besides not requiring hospitalization and sedation, taking into account that these patients presents greater risks by the immunosuppression and other comorbidities.
Supplemental Material 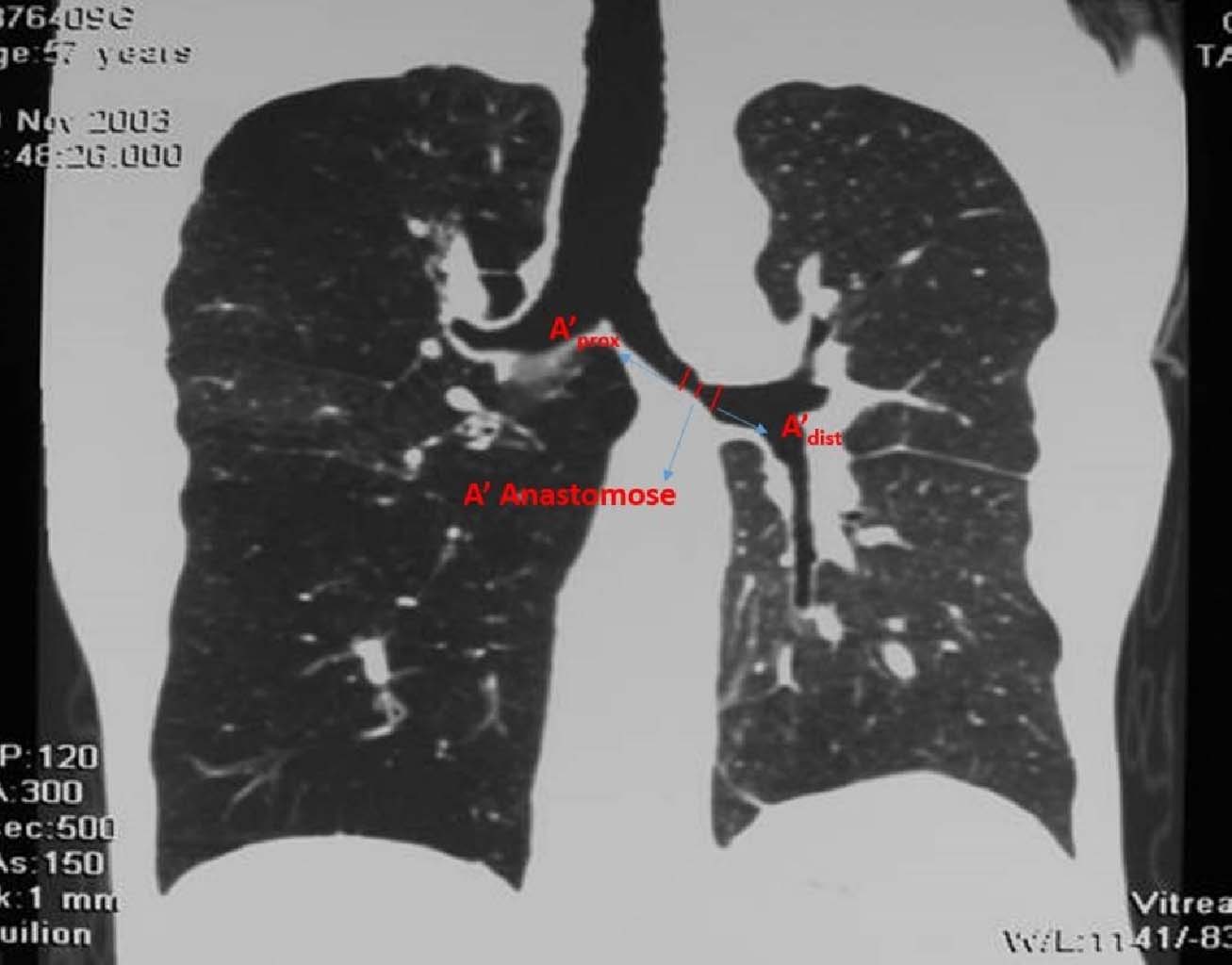 Figure 1. Shown in red, the three points of measure used to calculate the Anastomosis index 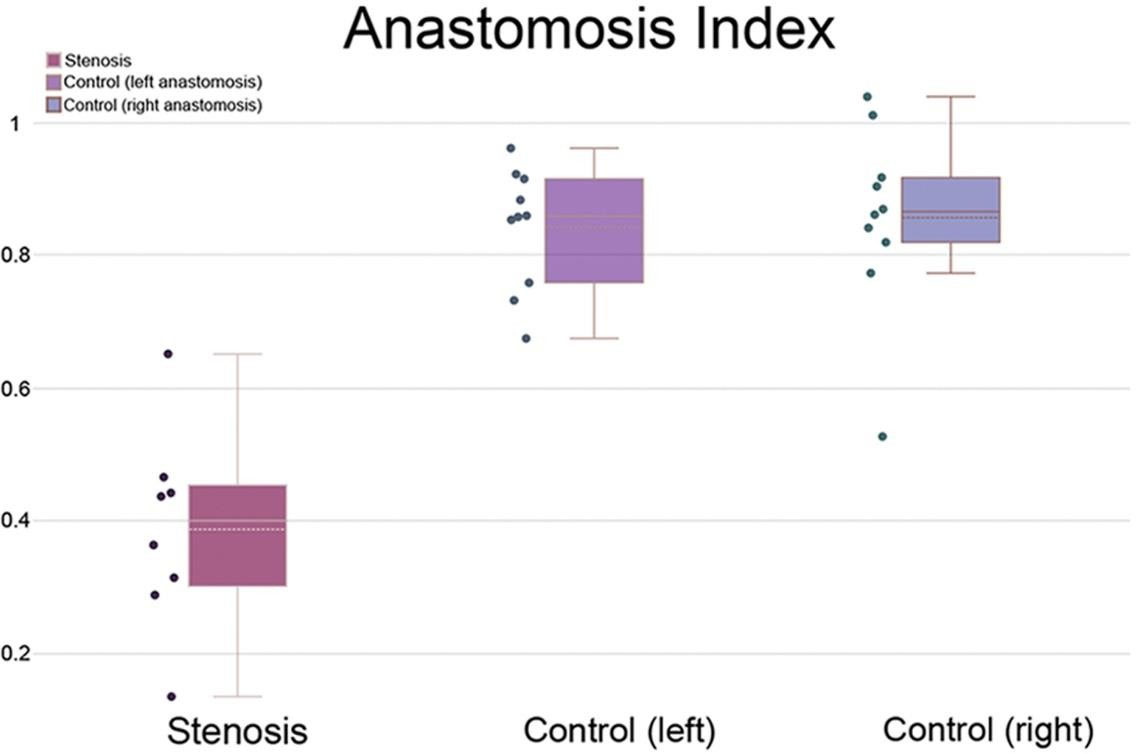 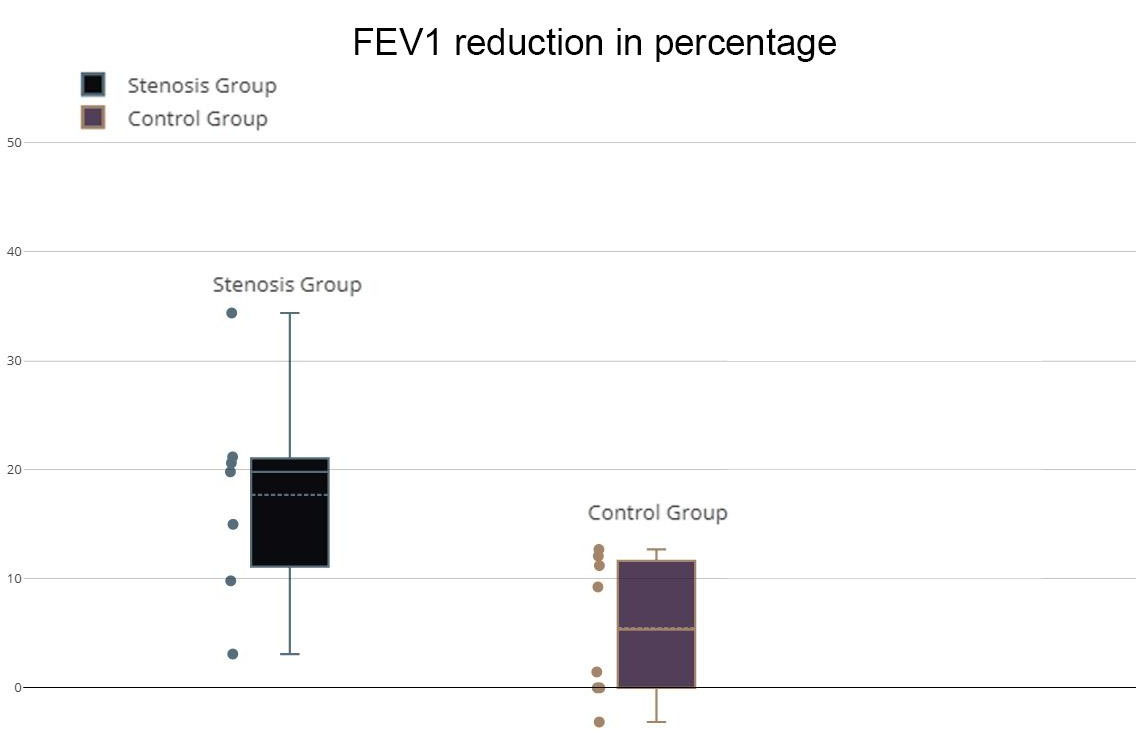 Figure 3: Boxplot showing the diferences in percentages between FEV1 in stenosis and control group