a risky yet successful approach

Introduction: Blunt Aortic Injury (BAI) is a rare event in high-energy traumas. It has an estimated incidence of 20 to 30 per 1 million population per year. Its importance, however, rely in the outstanding mortality rates, in which 80 to 90% of the patients die at the scene of injury and 50% of the survivors die at the hospital (1). The majority of BAI occur in the thoracic aorta and there are less than 10 described cases of floating aortic thrombus (FAT) secondary a BAI, from which no thromboembolic complication was described (2). Objective: We report a case of a large thoraco-abdominal BAI following thrombotic dissemination with multiple ischemic foci, an extremely rare complication of high energy traumas, and its management. Case Report: A 38-year-old previously healthy man was brought to our emergency department with a history of a 10-meter fall from a paragliding. He underwent primary evaluation which revealed a hemothorax, that was promptly drained, and signs of hypovolemic shock with no signs of pelvic stability and a painful abdomen. He was stabilized with volume resuscitation and norepinephrine, and no bleeding was found in a FAST protocol ultrasound. Additionally, he had a flaccid paraplegia, crepitation in the 10th and 11th ribs on the right and 10th on the left and referred pain in the palpation of T12 to S1. No bleeding was seen in the urethral catheterization or in a digital rectal examination. A tomographic scan suggested an aortic hematoma in D9-D10, ischemic lesions in spleen and left kidney and fractures of the ribs and the right transverse processes of T12 to L5 (Image 1). Also, a thrombus imaging was visualized in the abdominal aorta (Image 2). A laparotomy was performed, which confirmed the ischemic splenic lesion and found many nonpulsatile hemorrhagic foci in mesocolon, intestines and in the retroperitoneal space (Image 3). As there was thromboembolic evidence, we introduced prophylactic heparin in the immediate post operative (PO) and sent the patient to the intensive care unit (ICU). He evolved with pulmonary thromboembolism in the 3rd PO, with therapeutic enoxaparin introduced. The patient was discharged from the ICU in the 7th PO, he evolved with progressive improvement of the cardiovascular, respiratory and pain parameters, a conservative management approach was applied by the neurosurgery and vascular teams and he was discharged from the hospital in the 33rd PO, still maintaining complete paraplegia. Image 1 - Initial tomographic scan, with ischemic splenic and renal lesions. Image 2 - Aortic angiography with a floating aortic thrombus Image 3 – Intra-operative findings: Ischemic lesions and hemorrhagic foci.
Keywords: Embolic shower; Blunt aortic injury; Trauma.
References
1. McGwin G Jr, Reiff DA, Moran SG, Rue LW 3rd. Incidence and characteristics of motor vehicle collision-related blunt thoracic aortic injury according to age. J Trauma. 2002;52(5):859-65; discussion 65-6.
2. Shalhub S, Starnes BW, Tran NT, Hatsukami TS, Lundgren RS, Davis CW, et al. Blunt abdominal aortic injury. J Vasc Surg. 2012;55(5):1277-85. 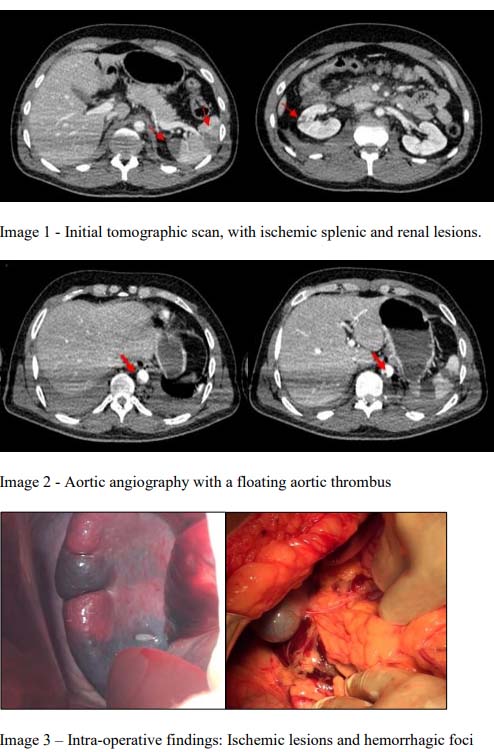 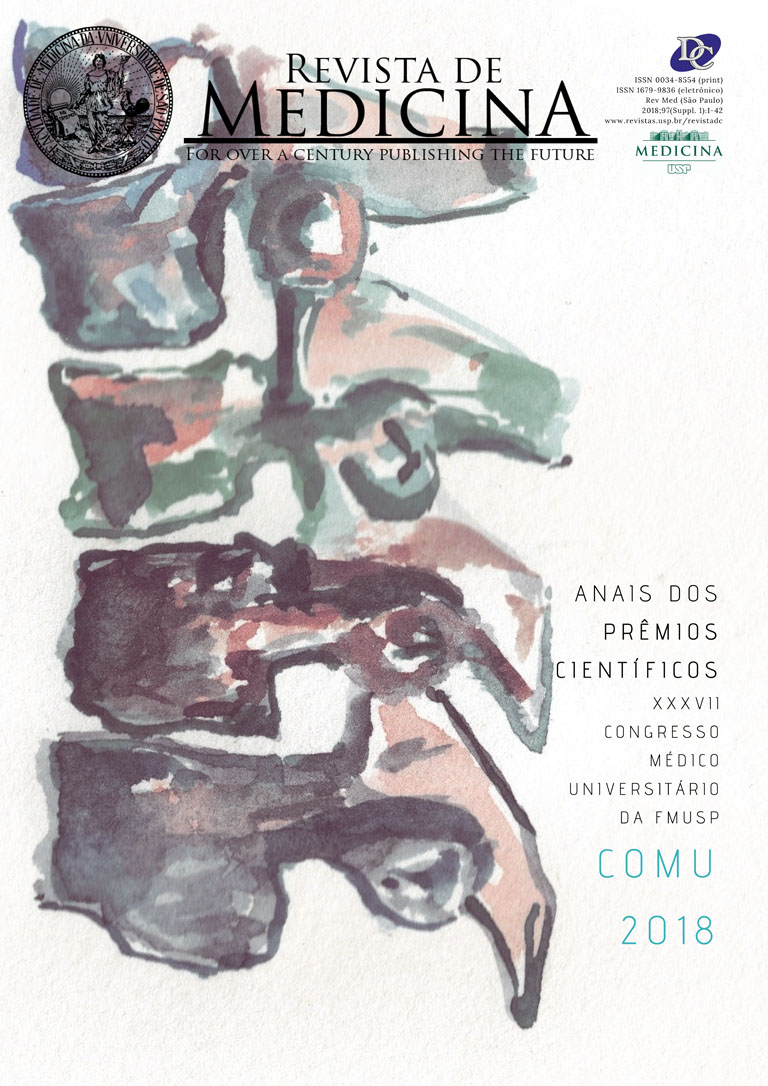